Note: It has come to my attention that Nancy W and her manuscript were in fact discovered quite a while ago by Wayne Bodle of Indiana University of Pennsylvania. Watch this space for more details soon!

This week the Wollstonecratian Twitter lists were buzzing: a book on Cuban botany, containing descriptions of plants likely to be useful for pharmacology and beautifully drawn illustrations was found to have been written by Mary Wollstonecraft’s sister-in-law, Anne (Nancy) Kingsbury Wollstonecraft. That the book had not been found and studied before, was due to a series of careless spelling and filing. 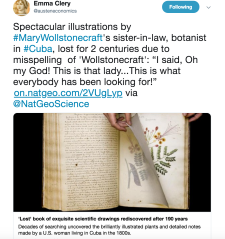 But now it has been found, more research is underway (including a brand new Wikipedia page), and one exciting find is this article, “The Natural Rights of Woman” published in the Boston Monthly in 1825, under the pseudonym D’Anvil which  Anne Wollstonecraft also used for articles on botany. Also a clue as to the identity of the writer on rights is that she uses knowledge of Linnaeus’ s botany as a marker of intelligence and education.

The Boston Monthly article is interesting in itself. It does more than rehash the arguments of the time, and in particular it questions the historical nature of patriarchy, claiming that there is little evidence that it ever was natural, but instead that it has been enforced and re-enforced through the ages. Like her sister-in-law, she argues that the failure to educate mothers creates almost insurmountable obstacles for the betterment of daughters, and asks for general reforms of education.

The manuscript on Botany has been digitized and is available here.

This entry was posted in Uncategorized. Bookmark the permalink.